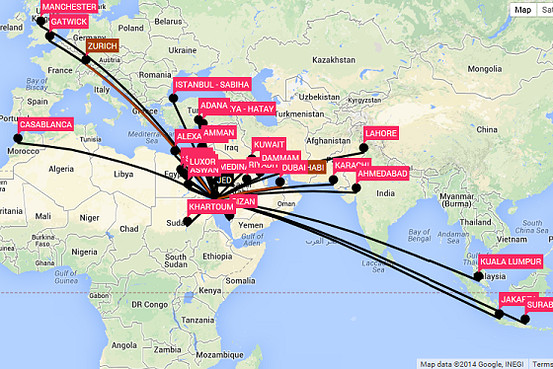 Jazeera Airways is to connect its Kuwait City base with London/Gatwick from October 27, opening the first new service between the UK and the Middle Eastern nation in 55 years. The low-cost carrier will fly daily services using Airbus A320neos.

In addition to serving Kuwait, passengers will be able to fly onwards to Dubai, Bahrain and Doha in the Arabian Gulf and to New Delhi in India. The link will be the first with the airline’s new premium economy product, which includes a 31in (79cm) seat pitch and a complementary meal, while business class offers a 33in (84cm) pitch, priority boarding and an in-flight meal.

Speaking of the milestone launch, the carrier’s chairman, Marwan Boodai, said: “Jazeera Airways has been building a great reputation in the Middle East in the low-cost airline sector, offering a strong alternative to the legacy airlines. We look forward to serving the UK market, and extending consumer choice to Kuwait and the Gulf, with our value proposition. This is a first an LCC in the Middle East will fly long-haul, using the A320neo aircraft.”

Michael Davenport MBE, British Ambassador to the State of Kuwait, said: “I am delighted to see Jazeera Airways launching this new service between Kuwait and Gatwick Airport, made possible by the new Air Services Agreement signed last year. It is really encouraging, as we mark the 120th Anniversary of the Kuwaiti-British Treaty of Friendship, to see more Kuwaitis visiting Britain and studying at British universities than ever before.”

The new 2,510nm (4,649km) link will not become the longest A320neo route when it begins in October. This distinction is currently held by S7 Airlines’ 2,840nm (5,270km) Moscow/Domodedovo-Tenerife/South connection.

Jazeera Airways currently operates a sole A320neo, 9K-CAQ (c/n 7396), which is understood to be configured with a two-class cabin seating 147 economy and 12 business class passengers. A second example, (c/n 9149, due to become 9K-CBC) was seen at Airbus’ Finkenwerder plant on July 31 in the carrier’s full livery, but without engines fitted. It is likely that this will be fitted with a three-class interior for the Gatwick service.