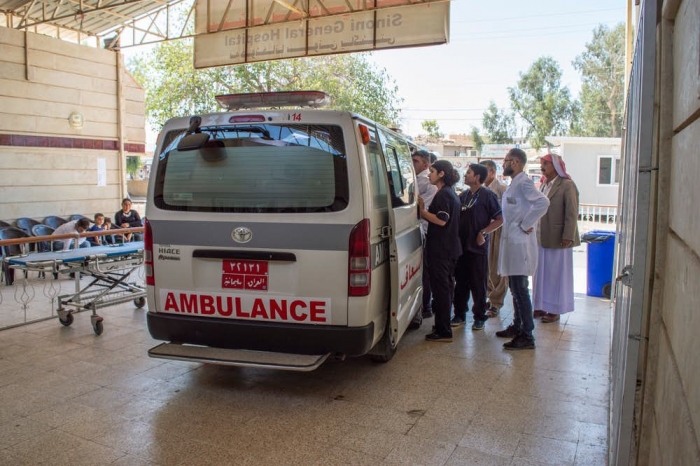 Over 10,000 refugees from North East Syria have fled across the border into Iraq following ongoing military operations.

Medair in Iraq has deployed a mobile medical team to Dohuk Governorate and begun delivering emergency health services to the refugees crossing into Iraq, 75% of whom the UNHCR estimates are women and children.

“Yesterday Medair saw 76 patients who had travelled long distances from North East Syria, many of whom presented with muscle and bone pain as a result,” says Alanna Smith, Medair’s Health Project Manager leading the emergency response. “Many people are shell-shocked, and the overall mood that we are seeing is downcast. Making this journey was not people’s first choice.”

Some refugees crossing into Iraq told Medair they had become separated from other family members in the rush to flee their homes. Most only fled with a backpack filled with belongings, and are concerned for their own well-being as winter approaches.

“We were at home and the village was being bombed. There were 10 of us and the others all fled. We stayed a short while longer but as the bombing continued, we fled too,” said Sinu and his wife, Nijot, who arrived in Iraq early Thursday morning. “Thankfully we’re safe, but we don’t know about the others. Maybe they’re alive, maybe not.”

UNHCR is preparing for a potential influx of up to 50,000 refugees in the region over coming weeks. “To provide a comprehensive response to the most urgent needs of these people, and to prepare for an additional surge of people crossing the border, a coordinated approach from all actors involved, including UN agencies and NGOs, must continue to be a top priority for all over coming days and weeks,” says Alanna.

Meanwhile Medair continues to reach the most vulnerable and conflict-affected people across Iraq through existing projects providing urgent health care, shelter, psychological support, and meeting water and sanitation needs to those who need it most.

Medair is implementing projects in Kirkuk, Ninewa, Duhok, and Salah al-Din governorates. Medair is known as a provider of high-quality relief services in Iraq, and for building trust with communities and officials. Medair has been active in the Middle East since 2012, working with Syrian refugees in Lebanon and Jordan, and began an emergency response in Iraq in August 2014. Medair had previously worked in Iraq in 1991, in 1992, and again in 2003.