The Iraqi Drilling Company (IDC) has started work on the first of its 20 oil wells at the Nasiriyah oil field in Dhi Qar.

IDC's Director General, Basem Abdul Karim, said that the project is part of a contract with the Dhi Qar Oil Company (DQOC) in cooperation with Weatherford.

The project is to be completed within 18 months.

The Iraqi Drilling Company (IDC) has signed a partnership contract with SOCAR, the the state-owned oil and gas company of Azerbaijan, for drilling and oil-field services.

The Director General of the company, Bassim Abdul Karim, said that the contract involves collaboration in the field of drilling and reclamation of oil wells, noting that the term of the contract is three years, and may be extended.

The agreement follows a visit by Iraq's Oil Minister, Ihsan Abdul-Jabbar Ismail, to Azerbaijan in September, and a visit by the General Director of Iraqi Drilling Company (IDC), Basim Abdulkareem, to SOCAR's headquarters in January.

The Iraqi Drilling Company (IDC) has announced that its technical and engineering staff have started drilling oil well MJ-129 in Majnoon oil field in Basra Province.

The Director General of the IDC, Bassim Abdul Karim, said that the planned depth of the well is 3,648 meters, reaching to the Mishrif formation.

He added that the drilling was done using the IDC 56 drilling rig. 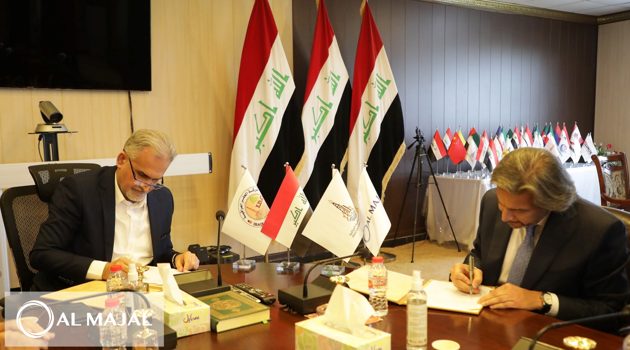 The Director General of the IDC, Basem Abdul Karim, said that the contract includes the provision of support and completion of the work associated with drilling and reclamation operations at Iraqi oil fields.

It also includes the development of personnel and the transfer of expertise and technology.

Iraq has signed a contract with Schlumberger to drill 96 horizontal and diagonal oil wells at the West Qurna 1 field in Basra.

Saad Al-Damen, Vice President of Schlumberger, said the contract will add 200,000 barrels per day to production at the field.

The Undersecretary at the Ministry of Oil, Hamid Younis, said that directional boring covers more area and reduces the water level in the oil wells.

The $480-million deal was agreed by the Iraqi cabinet in March.