Genel Energy has received notice from the Kurdistan Regional Government ('KRG') that override payments, whereby Genel receives 4.5% of monthly Tawke gross field revenues, will resume with the January 2021 invoice, to be paid in February 2021. Assuming the prevailing oil price, this translates into over $5 million of additional cash proceeds on a monthly basis.

This is consistent with the communication received from the KRG as announced on 17 April, which stated that the override payments would be suspended for at least nine months, and also that in a scenario where the oil price recovers to c.$50/bbl, a review of the situation would take place immediately in respect of the outstanding receivable.

In line with this communication, the KRG has now also submitted a reconciliation model for repayment of the receivable relating to amounts owed for invoices for oil sales from November 2019 to February 2020 and the suspended override from March to December 2020. We will work through this submission and update the market when appropriate, as further discussions with the KRG take place.

Iraq is reportedly poised to sign a multibillion-dollar contract with China's ZhenHua Oil, in what Bloomberg describes as a bailout from Beijing.

Under the deal, Iraq's cash-strapped government which will receive money upfront in exchange for long-term oil supplies.

Iraq's Ministry of Oil has announced initial oil exports for September of 89,153,899 barrels, giving an average for the month of 2.876 million barrels per day (bpd), up from the 2.613 million bpd exported in September.

Iraq's Ministry of Oil has announced initial oil exports for September of 78,388,619 barrels, giving an average for the month of 2.613 million barrels per day (bpd), slightly up from the 2.597 million bpd exported in August.

Iraq's Ministry of Oil has announced finalised oil exports for August of 80,494,536 barrels, giving an average for the month of 2.597 million barrels per day (bpd), down from the 2.763 million bpd exported in July.

Iraq's Ministry of Oil has announced preliminary oil exports for August of 80,494,536 barrels, giving an average for the month of 2.597 million barrels per day (bpd), down from the 2.763 million bpd exported in July.

Oil giant BP has just published details of its transactions with the Government of Iraq in 2018 in respect of the Rumaila oilfield, as part of its Report on Payments to Governments 2018.

Click on image below to see in more detail: 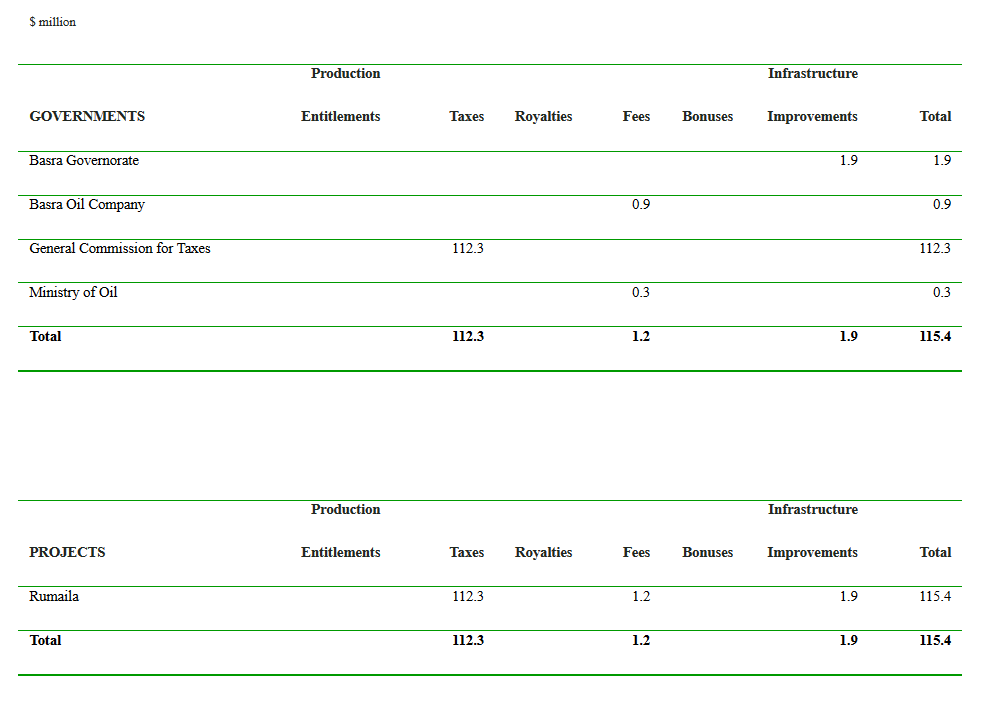 From Middle East Monitor, under a Creative Commons licence. Any opinions expressed here are those of the author(s) and do not necessarily reflect the views of Iraq Business News.

Iraq has incurred around $11 billion in losses in four months due to the global drop in oil prices, the State Organisation for Marketing of Oil (SOMO) announced yesterday.

The state-run organisation added that the country sold 423,284,489 barrels during the same period of 2019 at an average price of $62 per barrel. "Iraq achieved a total of $26.2 million in oil revenues in the first four months of 2019," the organisation added.

Reuters recently reported that oil prices had fallen yesterday as investors were worried about a second wave of coronavirus infections. But it added that the new output cuts from Saudi Arabia had tempered worries about oversupply and limited price losses.

Global oil demand has slumped by about 30 per cent as the coronavirus pandemic has curtailed movement across the world, leading to growing inventories globally.

While crude futures have fallen more than 55 per cent this year because of the virus, prices have risen over the past two weeks, supported by a modest rebound in demand as some travel restrictions - which were imposed by governments to curb the spread of the virus - were eased.

The KRG's Regional Council of Oil and Gas Affairs has published a report containing verified statistics covering the Kurdistan Region's oil exports, consumption and revenues for 2019.

The report, available in Kurdish, English and Arabic, provides a quarterly analysis of oil export information and average prices, together with a consolidated annual overview.

The data verification was performed by Deloitte.

The KRG regularly assesses what additional disclosures would enhance the transparency of its oil and gas sector. Accordingly, with the release of the 2019 report, the KRG is now providing information on the prepayment balances it owes to oil traders.

The Regional Council for Oil and Gas Affairs acknowledges the positive feedback received so far from domestic and international stakeholders. The council reiterates its commitment to the people of Kurdistan that Deloitte will continue to independently review the region's oil and gas sector.

A frequently asked questions handbook (also available in Kurdish, English and Arabic) will help readers to understand the report's contents.

Baghdad is said to have stopped payments to the Kurdistan Regional Government (KRG).

Writing for Argus Media, Rowena Edwards says central government will also seek to recover payments made since the start of the year, in the absence of KRG transfers of crude oil, which were part of the as-yet-unsigned 2020 budget.