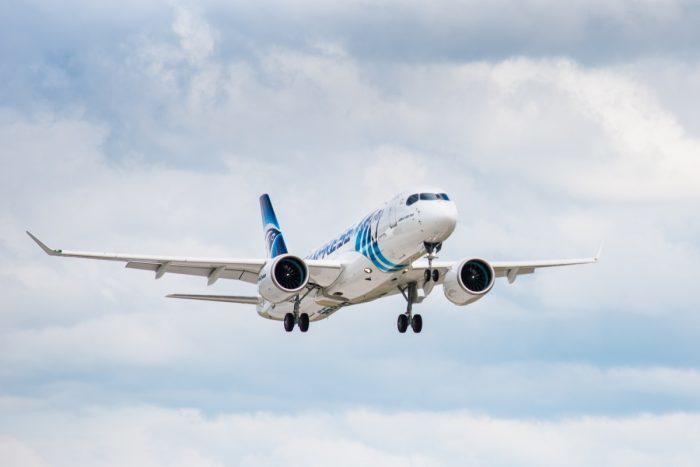 EgyptAir Express has accepted its first of 12 Airbus A220-300s, becoming the first carrier to operate the type in the Middle East. It is only the sixth airline worldwide to fly the type, following deliveries to airBaltic, Swiss, Korean Air, Delta Air Lines and Air Tanzania.

A big day for our friends @egyptair as they become the first airline from the Middle East and North Africa region to operate the new #A220! Take a look at how we built this aircraft proudly sporting the airline's iconic livery. pic.twitter.com/LbJAodh8Zd

The Cairo-based carrier is set to use the Canadian-built jets on domestic services and international routes to Middle Eastern, North African and Southern European destinations. They will replace 12 Embraer E170s which are gradually being phased out. An initial E1, SU-GCV (c/n 17000170), was retired in mid-June. It has been sold to Tunisian start-up Jasmin Airways along with sistership, SU-GCW (c/n 17000175).

The airliner is fitted out with a two-class interior accommodating 125 economy and 15 premium economy travellers. Alongside 11 further A220s, the carrier is awaiting delivery of 15 A320neos from the European manufacturer.