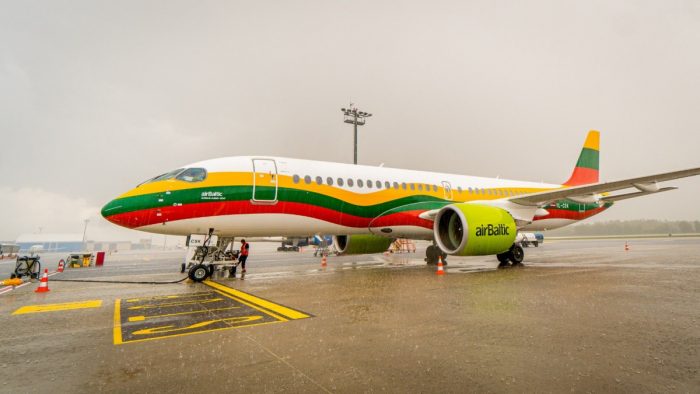 AirBaltic has completed its trio of special Baltic liveried Airbus A220s with the application of the Lithuanian flag to the fuselage and tailplane of YL-CSK (c/n 55039). The jet has also been renamed ‘Vilnius’, after the country’s capital city.

It Joins Latvian and Estonian-inspired colour schemes which were rolled out in November and June respectively.

Coinciding with the country’s centenary, the initial aircraft, YL-CSL (c/n 55041) flew over Riga in formation with a pair of Belgian Air Component F-16AMs and a German Air Force Eurofighter EF-2000, which were deployed to Šiauliai, Lithuania and Ämari, Estonia on Baltic Air Policing duties.

Unveiling the third aircraft, the airline said: “During the first six months of 2019 airBaltic has transported over 240,000 passengers to and from Lithuania. The airline has carried 20% more passengers in Lithuania to its network spanning Europe, Scandinavia, Russia, CIS and the Middle East than during the same period last year.”

It reported similar growth in June when revealing it had painted A220, YL-CSJ (c/n 50038), in Estonian national colours: “[Over] the first five months of 2019 airBaltic has transported [more than] 210,000 passengers to and from Estonia. [It also] carried 31% more passengers in Estonia to its network than during the same period [in 2018].”

Martin Gauss, the carrier’s CEO: “We are proud to provide the best connectivity to and from the Baltics. Today, we offer more than 80 direct routes from the Baltics. We are committed to the Baltic states and will continue our sustainable growth path helping the future development of Latvia, Estonia, and Lithuania. airBaltic team is delighted to present this new livery to its Lithuanian passengers. Now the flags of all three Baltic states will proudly wave above our heads high in the skies.”

The three aircraft are expected to be gathered together for an event later this month celebrating the 30th anniversary of the Baltic Way – a peaceful political protest held on August 23, 1989. Reuters news agency reported at the time that 700,000 Estonians, 500,000 Latvians and 1m Lithuanians joined hands, forming a human chain from Tallinn, through Riga, to Vilnius – around 373 miles (600km).