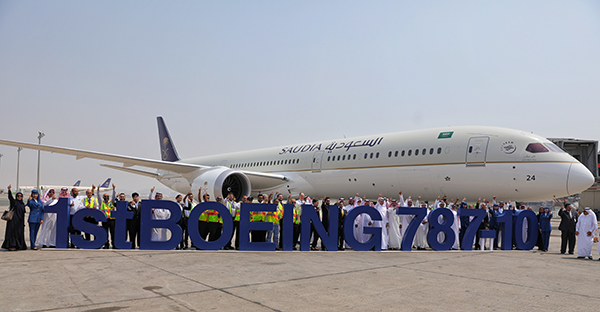 Boeing has delivered an initial 787-10 to Saudi Arabian Airlines, making the Middle Eastern carrier the eighth operator of the largest Dreamliner variant.

Saleh bin Nasser Al-Jasser, the airline’s director general, said: “Saudia operates a state-of-the-art fleet equipped with the latest technology, and in addition to the airline’s existing Boeing 787-9 Dreamliners, is now adding the 787-10 variant which will further support future network growth plans. The airplane’s onboard cabin features, long range capability and the latest in technological advancements are among the many aspects of what makes the Boeing 787 highly popular with our guests.”

Ihssane Mounir, Boeing’s senior vice president of commercial sales and marketing, added: “Saudia has been a valued partner with Boeing for nearly 75 years and this delivery marks another major milestone in our partnership. Our team takes great pride in building and delivering quality aircraft to Saudia and we are honoured by the continuing confidence in the 787 Dreamliner and 777 families. The addition of the 787-10 to Saudia’s fleet will continue the superior inflight experience that passengers have come to expect of the Dreamliner. Moreover, the unmatched fuel efficiency of the 787 will help Saudia open new routes and achieve significant fuel savings and emission reduction.

Boeing says that, since the airliner entered service in 2011, it has “enabled the opening of more than 235 new point-to-point routes and saved more than 40bn pounds of fuel”. To date, the manufacturer has handed over 38 787-10s to Singapore Airlines, Etihad Airways, United Airlines, EVA Air, KLM Royal Dutch Airlines, All Nippon Airlines, Vietnam Airlines and Saudia.